What is an Accessible Shower? 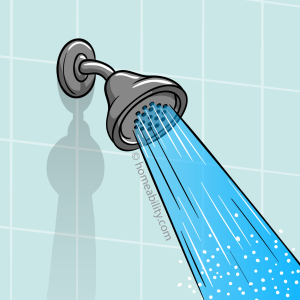 An “accessible” shower is one that’s user-friendly and optimized with design elements that readily work for everyone. It should…

Following is a break down of the features most commonly found in an accessible shower, and an overview of important things to keep in mind when selecting, designing, or installing each.

The shower’s entrance should be wide enough to allow a walker, wheelchair, or wheeled shower chair to pass through with ease. In general, most (but not all) persons using mobility aids will be able to pass through an opening that is 32″ wide. If the shower is being designed for a specific individual’s needs, make sure to take into account both the width of the person’s mobility device and their skills for maneuvering with the equipment when selecting an appropriate shower door width.

If you opt to install a shower door at the shower’s entrance (versus a shower curtain), it is important to be aware that the hinges and door itself will occupy space inside the doorframe when in the open position, so to achieve a “clear opening” of 32 inches for the mobility device to pass through, it is usually necessary to install a shower door that is a minimum of 34 inches wide.

2. Shower Curtain or Shower Door: Which is Best? 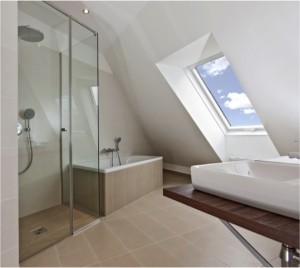 This is a common question that arises when designing an accessible shower. Shower curtains are usually preferable to glass shower doors from an ease-of-access standpoint, because a shower door creates one more obstacle for a person using a walker or wheelchair to contend with. Not only are shower curtains usually easier for most persons using mobility devices to manage, but they are also safer because glass shower doors can and do have a history of spontaneously shattering.

In the event that you do opt to use a shower door, make sure to install it so it swings outwards. Why is this important? Because if someone experiences a fall while inside a shower with an inward-swinging door their body can block the door from opening, making it difficult for rescue personnel to get them out.

A flush, zero-threshold entrance is ideal. Even a small threshold of just one to two inches high can prevent entrance by a walker or wheelchair, consequently increasing the likelihood a person will have to ask someone else for help to get in and out of the shower.

While a curbless shower is optimal, what if the home has concrete slab floors or other architectural design features that would make it more difficult (or impossible) to install one? If installing a threshold at the shower entrance cannot be avoided, try to install the smallest threshold possible, ideally the threshold should be 1/2 inch or less with a rounded (aka beveled) edge, which will allow most wheeled mobility devices to pass over.

Shower seats come in a variety of shapes and styles, which include: stools, chairs and benches, some of which are portable, while others are designed to be attached to the shower wall. In general, wall-mounted shower seats will tend to be more stable than the portable-style bath seats (if installed correctly). The bench-style shower seats tend to be better than the stools and chairs because they have a larger sitting surface, making it is easier to land on safely when sitting down and can also provide you with a helpful place to rest a wash cloth or other shower items on the bench seat beside you.

Standard overhead showerheads, that are fixed to the front wall of a shower, will typically reside too far away from where a seated bather performs their shower. Installing a handheld showerhead, also known as an adjustable showerhead, can greatly enhances a seated user’s ability to access the water and bathe independently.

Some handheld showerhead models simply consist of a showerhead attached to the end of an adjustable hose. Others come attached to a vertical slide bar that gets fixed to the shower wall. The vertical bar is helpful for holding the showerhead while a bather is soaping and shampooing. A few models with a vertical slide bar are cleverly designed to dual as a grab bar as well, giving bathers a safe place to hold onto while bending to wash legs and feet and for assist when stepping in and out of the shower. To learn more, visit Homeability’s Handheld Showerhead Guide.

If you are designing a new shower, make certain to design it with the showerhead and shower controls located within easy reaching distance of the seat. It is unfortunately all too common to find “accessible” showers with a permanently installed seat inside that’s located nowhere near the water or shower controls!

A single lever-style shower control is easiest for most persons to operate, especially those with poor hand strength or arthritic fingers. It even allows a user the option to nudge it on and off with a wrist or elbow if need be.

Install an anti-scald device for regulating the water temperature to help prevent burns and falls. Falls can occur when individuals try to rapidly retreat from a shower that is too hot or when water temperatures change unexpectedly (i.e. when someone else flushes a toilet elsewhere in the home).

Make sure to select non-glossy, slip-resistant flooring materials for the shower stall and bathroom floor. Flooring with a slip-resistant, wet rated coefficient of friction (COF) of 0.6 or higher is generally considered safe. Examples of non-slip flooring include: porcelain tiles with a matte or textured finish, vinyl flooring with a nonskid polish, quarry tile with many narrow joints.

If a tile floor is chosen, smaller sized tiles (E.g. 2”x2”) have more grout lines than larger tiles providing additional friction to help prevent the feet from slipping. Be careful that the grout lines present between tiles aren’t too wide (greater than ¾” ) or they will catch walker and wheelchair wheels making it difficult for a person to move and turn.

Glossy floors should be avoided. They can be slippery and can also create a glare when lights reflect off of them, making it disorienting for an individual with unsteady gait or reduced visual skills.

Most standard showers don’t include a light over the stall. With age, as well as with some illnesses, eyes tend to change, making it harder to see well when light quality is poor. Installing a waterproof light over the shower stall can be a helpful, welcome addition.

For persons who have respiratory problems or problems regulating body temperature, make sure to select a high functioning vent so it is easy to regulate the room temperature and humidity levels.

A person with mobility issues will often move more slowly, requiring more time to get in and out of the shower. Furthermore, as age increases skin tends to thin, making it more difficulty to maintain body heat. Having a heat lamp can be a nice addition to help the user stay warm while getting in and out of the shower and drying off.

For men who like to shave while in the shower, make sure to include a fog-free, adjustable height mirror.

As simple as the information above may appear to be, it is all too common for things to be forgotten or implemented incorrectly when installing an accessible shower. The most common design errors include:

Curbless showers just make great design sense! They are versatile, accessible by all users, and beautiful in their simplicity. If your finances and the architecture of your home permits, having at least one curb-less style shower in your home (ideally located on the ground floor) is the best way to ensure you can enjoy a lifetime of hot showers. It’s just as easy for someone who can walk easily to enter a curbless shower, as it is for someone who uses a cane, walker, wheelchair or self-propelled wheeled shower chair.

Are you helping to create the design plans or make a space accessible for another individual? If so, the first step should be to have the person perform a few transfers to different surfaces. Ask them to sit down on a toilet, bed, chair etc. and observe how they move, where they want to reach out to grab for support etc. Ask the person, if they are able to do so, to try out an accessible shower at a public pool, YMCA, hotel, or in the hospital (if they are still an in-patient), and have them take pictures or a video of it so you can observe how they move. Ask them what worked or didn’t work for their needs with respects to the height of the seat, placement of the grab bars, and so on. Then armed with this knowledge you can create designs that will best fit their needs and preferences.