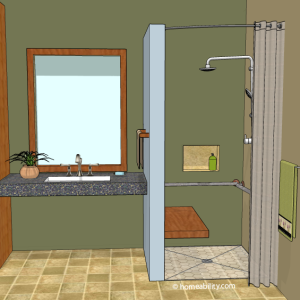 How does the water stay inside a curbless shower?”

A commonly raised concern when installing a curbless, barrier-free shower stall is how to prevent the water from escaping the shower stall. This can be accomplished using one or more of the following strategies.

8 Ways to Contain the Water Inside a Curbless Shower

In general, from a water-containment perspective, a shower door will usually contain the water better than a shower curtain. If someone in the home uses a walker or wheelchair, however, or anticipates needing to use one in the near future, then from an ease-of-use standpoint a shower curtain is typically preferable to a shower door because it requires less tricky maneuvering for a person to enter and exit the shower.

Why is a shower curtain easier to manage for most people who use a walker or wheelchair? A shower door (one that swings outwards) requires a person using a mobility aid to approach the door and grasp the handle, then move backwards out of the way far enough to allow the door to swing clear past both themselves and the mobility aid. Most bathrooms are limited on space, so trying to get a walker or a wheelchair out of the path of the door swing can be difficult. In addition to this, walking backwards is not safe for a person who uses a walker and likewise trying to pull a door open while simultaneously moving a wheelchair backwards is not easy for many wheelchair users to do. A curtain on the other hand simply requires a user to brush the curtain aside and enter.

To learn more about Accessible Bathrooms, follow these links: