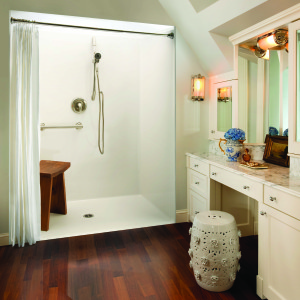 Showers with little or no threshold present at the entrance are trending now. Not only do they look modern and sleek, but they are also functionally versatile, providing safer and easier access by persons of all ages and abilities.

Curbless and low threshold showers come in two forms: custom-built and prefabricated models. In the guide below, we cover the benefits of prefabricated showers and some details to consider when selecting one. To learn tips for creating a custom-built accessible shower, visit our “Beginner’s Guide to Designing Accessible Showers.”

What is a Prefabricated Shower Stall?

A prefabricated shower stall, also referred to as a “Prefab Shower” for short, is a shower stall and/or shower components that are constructed off-site in a factory, as opposed to having a custom-built shower constructed entirely from scratch on site.

Benefits of a Prefab Shower Stall

Prefab showers can be ordered as one seamless shower unit or in multiple pieces that get assembled onsite. We have identified some of the advantages and disadvantages of each type below.

Most prefab shower stalls are square or rectangular in shape. Some round stalls and neo-angular shower stalls exist as well. We have highlighted some the main benefits and drawbacks of each of these shower shape below.

Architecture permitting, a curbless, zero threshold shower or a shower with a rounded threshold that is ½ inch high or less at the entrance is ideal. Why? Even a simple, seemingly harmless threshold of one or two inches can prevent entrance by a walker or wheelchair user. Consequently, this means the home’s occupants will be more likely need to ask others for assistance with bathing in the later years of life. Curbless showers, on the other hand, inherently and readily work well for everyone! A young healthy person can use it. A person using a walker can easily walk into it. A person using a wheelchair, can roll right in and out without needing assistance from anyone else. Persons who needs assistance from a family member can easily be assisted in and out on a rolling shower chair. It can even make washing pets easier too.

What if your home has concrete slab floors or another architectural design feature that would make it more difficult (or impossible) to recess the shower stall into the floor in order to create a flush, threshold-less entrance? If installing a threshold at your shower’s entrance can’t be avoided, try to select a prefab shower model with the lowest threshold possible that can be used in conjunction with a shower curtain (versus glass shower doors). The section below provides reasons why a shower with a curtain is normally a better option.

The question about whether a shower door or curtain is better commonly comes up when designing an accessible shower. The answer: Shower curtains are usually preferable to shower doors. While a door will usually hold the water in better, it creates one more obstacle for a person using a wheeled mobility device to contend with. A person using a walker or wheelchair must approach the door, grasp the handle, then try to move awkwardly backwards with their mobility device out of the way of the door swing while also pulling the door open, which is not easy for most people to do!

Furthermore, most showers with glass walls and/or shower doors are designed in such a way that a user can’t directly access a shower seat that’s located inside. If a small threshold is present at the entrance, users will only have one option to enter the shower: they will be forced to step over the threshold to enter. Stepping in and out over a threshold can be difficult or impossible to do for someone with a broken leg or for someone who is weak due to a stroke, Parkinson’s Disease, Multiple Sclerosis or just general age-related weakness.

In contrast, a shower curtain can usually be pushed back out of the way to expose one side of the shower seat. This provides a user with the option to sit down on the side of the seat first prior to entering the shower stall. Then from a safe seated position, each leg can be lifted one at a time over the threshold. It also allows a wheelchair user to park beside the bench and slide sideways from their wheelchair seat onto the bench seat.

Last, but not least, shower curtains are safer than glass shower doors. Why? Glass shower doors have a documented history of spontaneously shattering at times, which can cause an injury if someone is present in the room.

Ways to Prevent the Water From Escaping

There are a number of good ways to help prevent the water from escaping a low or no-threshold shower stall with a shower curtain at the entrance, which include:

Regardless of a shower door’s drawbacks, we know some people will want to install one anyway. If you are one of those people, make sure to keep the following in mind:

Prior to selecting a prefabricated shower unit it is important to determine what type of shower seat you need or want (if any). There are three different types of shower seat, which include:

Prefabricated shower stalls can be found made from acrylic, fiberglass, solid-surface materials, tempered glass, or a combination of these materials. The majority of the models that are available will have a fiberglass frame with an acrylic or polyester gelcoat. Below we have highlighted some of the pros and cons for each type of shower material.

1. Tempered Glass Shower Enclosures
Tempered glass is designed such that if it shatters, it will fracture into many tiny pieces, instead of large, jagged glass shards, like a regular pane of glass.

3. Acrylic Showers
Acrylic is a type of plastic with a shiny glass-like finish. It is comprised of synthetic resins and textile fibers made from one or more derivatives of acrylic acid.

4. Solid-Surface Materials
These are composite materials that are either cast or compression molded. They are made by mixing marble dust, polyester and acrylic resin with powdered bauxite filler and pigments. Examples of solid-surface materials include Vikrell, Swanstone Veritek, and Corian, among others.

Prefabricated showers can be ordered as shower kits, each of which can come with different parts. Some prefabricated shower model kits only come with the walls and a shower pan. Other models automatically include or have the option to include, slip-resistant flooring, a built-in seat, storage shelves, grab bars, handheld showerhead, shower doors and/or a trench drain located at the front opening of the shower pan to help retain the water.

The sky’s the limit!

You can opt to buy a one-piece shower unit as discussed at the start of the article, or a shower assembly kit with all the features already included, or you can mix, match, and customize the shower in any way you want by doing one of the following:

The type and location of the shower controls is an important consideration. Ideally, the shower controls should be located adjacent to the seat, making it possible for a bather to easily control the water pressure and temperature from a seated position. If the layout won’t allow for this, then install a handheld showerhead with an on/off switch located on the showerhead itself. Single, lever-style shower controls are easiest for most users to operate.

In a small, transfer-style shower (36”x36”) the controls can be located on the wall opposite the seat. Ideally, they should be installed between the centerline of the wall and the shower opening so it is possible to reach in, turn the water on, and adjust the temperature, prior to getting in.

Location of the Drain is an Important Detail!

Make sure to select a shower stall model with a drain that is located in the same location as your existing tub or shower’s drain, so the plumbing will line up correctly. Drains can be located on the left, right, or center of a prefab shower stall.

Make Sure to Include Wood Blocking!

Prior to installing a prefab shower stall, make sure to include wood blocking in the walls in the areas where a shower seat and grab bars will be installed. Prefab shower models will sometimes include a layer of wood on the back side, but many do not. If the shower model you have selected does not have wood-blocked walls, ask your contractor to install wood blocking inside your bathroom walls, prior to installing the shower stall. This will allow you to install grab bars, shower seats and other items anywhere you want or need to in the future.

Cost to Install a Prefabricated Shower

The cost to purchase and install a prefabricated shower stall “with a small threshold present at the entryway” usually ranges from $1,000 to $5,000. The cost will vary based on the amount of work the contractor must do to remove the existing tub or shower, the size of the stall, the material the new shower stall is made out of, the type and number of features the shower stall includes, and your geographic area.

Installation of a “curbless shower” will cost more because architectural adjustments normally need to be made to lower the shower floor, as necessary to make the interior shower floor flush with the exterior bathroom floor. The price for installing a curbless shower varies widely based on size of the bathroom, price of the prefab shower unit selected, your home’s architecture, and the geographic area where you live. In some cases, a curbless shower can be installed for as little as $10,000. Consult with a local contractor to get a more accurate estimate.

Installing a prefabricated shower unit can be a great way to quickly transform an inaccessible bathing space into an accessible one. When selecting a prefabricated shower unit, keep in mind that any amenities that may be included with it, such as the seat, soap dish, storage shelves, controls and grab bars will be permanently fixed in place, so make sure they fit your functional needs, prior to ordering.

If you will be replacing your shower only (not remodeling your entire bathroom), then installing a prefabricated shower is typically cheaper, requires less on-site preparation time for installation than custom-built showers, and can oftentimes be installed in as little as a day, rather than the weeks it normally requires to install a custom-built shower. However, if you will be fully remodeling the bathroom and in doing so the bathroom will be gutted to the wall studs, then it may be equivalent in cost, or possibly even cheaper, to install a custom-built shower. Discuss both options with your contractor to determine which solution is right for you.

A shower with no threshold at all, also known as a curbless shower, makes great functional design sense for everyone! Curbless showers are effectively an investment in future independence because they are accessible by all users — regardless of age or ability level.

If your finances or the architecture of your home won’t allow you to install a curb-less shower, the next best option is to install a shower stall with the smallest threshold possible and then to install a bench-style shower seat that extends to the shower threshold. This makes it possible to sit down on the end of the seat while both legs are still firmly planted outside the shower stall. Then, from a safe seated position you can lift one leg at a time over the threshold, thereby eliminating the need to ‘step’ in and out. It also allows a person using a wheelchair to park the wheelchair beside the shower seat and independently (or with the assist of another person) slide sideways from the wheelchair seat over onto the shower seat.

To get inspired and discover more about Accessible Bathrooms, follow these links: