What is a Collapsible Water Dam? 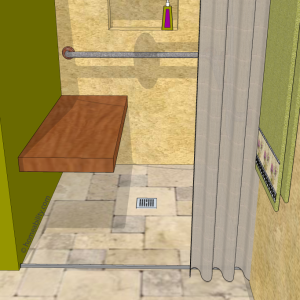 A collapsible water dam is a narrow, flexible strip of material that is applied along the outer edge of curbless showers to help keep the water inside and yet still allow someone using a wheeled device to easily enter and exit. (Note that these strips are sometimes referred to as water retainers, water stoppers, shower dam, wheelchair accessible shower thresholds, or collapsible thresholds).

How does it work?

The water dam compresses when a wheeled device rolls over it, thereby permitting someone who uses a walker, wheelchair, or wheeled shower chair to enter and exit a curbless shower with ease. It then quickly springs back to an upright position to keep the water contained inside the shower.

Water dams are easy to install. Most models require simply applying epoxy or rubber adhesive along the bottom edge of the dam and then sticking the dam to the shower floor. Some models come equipped with a self-adhesive strip, so all you need to do is cut the dam to the length you need, remove a protective strip of paper, and stick the dam in place wherever you want it. A few shower dam models require the use of screws to fix the shower dam in place.

Caulk is then applied to seal the ends where the dam meets the shower wall and/or special end caps can be attached at the ends of the threshold to prevent water from leaking out at the corners. If a linear trench drain is present at the shower stall opening, the shower dam is applied along the outermost edge of the trench drain.

Shower dam models vary in the features they offer.

Collapsible water dams can be purchased independently or as part of a kit that can include any or all of the following: rubber threshold, end caps and/or epoxy glue kit. When comparing water stopper kits and prices, it is important to be aware that the kits will come with different length water dams inside. Make sure to choose a kit that contains a threshold dam in a length adequate for your shower stall.

T-shaped and tube-style shower dams are both effective in retaining water inside the shower stall. The adhesive substance holding them in place can dry out over time and will periodically need to be reapplied. Shower dam models that get screwed into the shower floor are a more permanent, long-term solution.

Water dams are only one means of preventing the water from escaping the confines of a curbless shower. In most cases (unless the shower stall is unusually large) the water dam will not be sufficient to contain the water all by itself. Water dams work best when coupled with a long, weighted shower curtain and a shower splash guard, which helps to hold the shower curtain more flush against the sidewalls. For more tips on water retention methods, read Curbless Shower: 8 Ways to Contain the Water Inside.

If you are building new or completely remodeling, we recommend installing a linear trench drain at the entrance to the shower for maximal water retention. A water dam can additionally be applied along the outer edge of the trench drain to best ensure the water will remain contained inside the shower.